The Brahmaputra River had swollen early, flooding its low-lying islands.

On Saturday, June 18, 2022, 10-year-old Mohammed Ashib Babu went to school. He attended classes and played football with his classmates. On Sunday morning, there was a light rain. For the children, the rain was sheer joy. Ashib could not resist the temptation to bathe in the river water. On Monday he was no more.

Bathing in a creak or a pond is part of everyday rural life. Ashib’s close friend and classmate, Ashib Iqbal, (who coincidentally shares his first name) remembers frequently going for a swim with him. “Only a few days ago Ashib and I swam together in a pond,” said Ashib Iqbal. “We don’t swim anymore. We have been told not to swim in flood water.”

Floods are a yearly phenomenon in the river island areas and other parts of the country. When the river submerges low-lying areas, latrines go under as well, disrupting sanitation for communities. The usually- innocuous water becomes lethal.

Death from waterborne diseases during and after floods is a widespread problem all over the world. Thousands have been infected by waterborne diseases in Bangladesh during the floods in June 2022. Out of the 126 who have died, diarrhoea is one of a common cause of death after lighting strikes and snakebites.

However, the villagers of Goynar Potol say Ashib’s case was so severe, he wasn’t even out of the water before he started feeling unwell. He had to immediately rush to the bathroom.

Mossammet Kamrunnaher Kakoli, a teacher at Friendship School in Goynar Potol, a river island in the Northern border district of Kurigram, said when Ashib didn’t show up at school on Sunday, her neighbour, who he usually came with, couldn’t tell her why he was absent.

“I tried to call his mother, but couldn’t get through.” Even his neighbour didn’t know how ill Ashib was. It was hard to conceive that anything was wrong. Just the day before, they had all laughed and played together.

Ashib Babu’s condition kept getting worse until he was sent to Kurigram Sadar Hospital on Monday. Unfortunately, it was already too late, and he perished en route.

“I feel so sad about the unexpected death of Asif Babu,” said Brig. Gen. Ilyas Iftekhar Rasul, head of Education at Friendship. “The remoteness of the area compounded the lack of timely treatment. We shall have to sensitise the students and parents more on the precautions required during the flood period.”

Deputy director for health, Rafi Siddique said that more needs to be done across different programmes to ensure communities are aware of what services are available to them, and are able to quickly access these. “We need to carry out integrated awareness campaigns,” he said.

“He was good at his studies. I cannot forget him,” said Kakoli. “He was mischievous, he created a lot of memories. His friends say the school feels empty without him.” 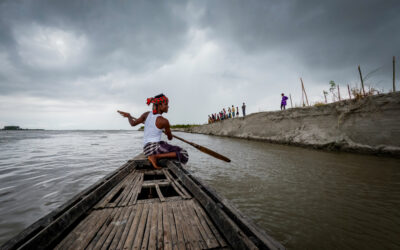 Left in the Wake

Rangpur division falls behind the rest in SDG metrics A boatman rows by an eroded riverbank, with people standing by to check out their newly-formed boundary line. ©Orjan Ellingvag by Dr. Kazi Maruful Islam,Raeed Abd-Allah ChowdhuryMd Abdullah Al ZobairJuly 31, 2022...

Close to Home from Far Away

Architecture exhibition for Kashef Chowdhury visited by Bangladesh ambassador The ambassador listens to a poet also attending the event, in front of a model of a Friendship Learning Centre at the Rohingya camps. ©Friendship by Raeed Abd Allah ChowdhuryAugust 8, 2022... 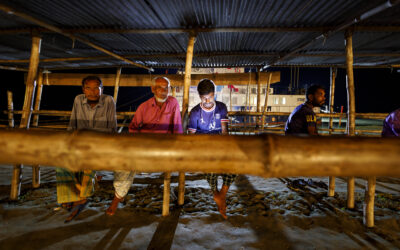