‘It feels good to reminisce about the happier days’

“It feels good to reminisce about the happier days,” the sadness on his face was noticeable as he spoke. These words were said by Chittaranjan Raptan, 51, a resident of Jhapa village of Padmapukur Union in Shyamnagar Upazila.

He went on, “We have been living in this village for five generations now. We had 3.5 bighas of land (around 5,250 m²), which we used to cultivate paddy and fish. We would harvest around 80 tons of rice from each bigha of land every season. We also reared three cows for land cultivation. We were able to pay our expenses and live comfortably with what we produced. Our household was blessed with prosperity, peace and happiness.”

That was before the 1988 cyclone swept across the village of Jhapa, destroying Chittaranjan’s family home as well as their crops. “We managed to fix the house and make it livable, but the rice in our fields was completely destroyed. The anxiety that resulted from the financial instability that ensued took a toll on my father, and he passed away the following year.” An emotional Chittaranjan continued.

However, he overcame the grief of his father’s death and started afresh. He began cultivating rice again and gained success. Financial stability slowly crept back in. His village was surrounded by the greenery of paddy fields. Besides the river fish he was able to get a wide variety of local fish. In his yard there were sweet mango, jackfruit, lychee, coconut and betel trees. A range of vegetables grew during the winters. Peace, happiness and prosperity were restored in his household.

Heartbreakingly, the ghosts of his past would return to haunt him and his family again, this time at a more devastating scale. On May 25, 2009, Cyclone Aila hit the coastal areas of Southern Bangladesh, including the village of Jhapa, destroying its embankments and leaving the paddy fields waterlogged with saline water. Chittaranjan’s house and crops were again destroyed and this time salinity rendered the land useless for cultivation.

He rebuilt his house with help from local authorities but the inability to cultivate crops brought huge financial burden on his and his family’s shoulders, forcing him to sell 3 out of the 3.5 bighas of land he owned. On the remaining land he made an enclosure to farm fish. But he had to contend with viruses, excess rain and various climate disasters. Rising debt and a lack of success from his fish produce forced him to become a daily labourer to put food on the plate for his family of four—his mother, wife, son and himself.

Climate disasters took away everything Chittaranjan had—his financial stability, his income opportunity and his family’s happiness, driving him towards poverty. His wife, Debrani Raptan, often experiences mental health breakdowns due to the anxiety caused by the absence of financial security.

The weight of responsibility on his shoulders increases with each day as he struggles to make ends meet. A senior citizen now, Chittaranjan is unable to start new ventures to lead his family back to greener pastures. Sometimes he sits silently at night and reminisces about the good days of old. 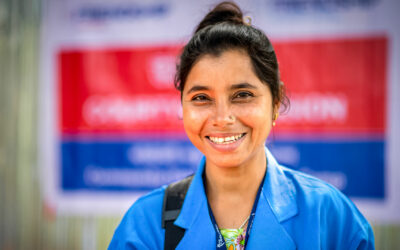 Test of fortitude for char students appearing for SSC exams

FRIENDSHIP SCHOOL STUDENTS OPTIMISTIC DESPITE TRAVELLING MILES AWAY FROM HOME TO SIT FOR NATIONAL MATRICULATION EXAMS Friendship Secondary School students prior to the start of one of their SSC examinations. ©FRIENDSHIP by TAHMEED CHAUDHURYSeptember 21, 2022 Tenth...