What it means to be a citizen

How Friendship is saving lives by bridging marginalised citizens to vital services and what other organisations can learn from this.

Covid-19 is not the only pandemic the world is currently being forced to confront. In fact, certain social pandemics have been present for decades and remain unaddressed. One such crisis is that of lack of access to vital services, with examples abound in the developing world. The case of Nur Alam and his brother illustrates this vividly. Nur Alam is a young Bangladeshi who lived with his parents, now deceased, and two siblings in the Kabilpur Char. He is both deaf and unable to speak, and his brother also suffers from physical disabilities. And yet, until recently, neither sibling had access to any form of welfare benefits. And theirs is but one of countless cases.

Geographical circumstances certainly generate these conditions, given how remote chars (sandbar islands) are, isolated from the mainland by several kilometres of river. Kabilpur, for example, is an island located along the Jamuna River in northern Bangladesh, an hour’s trawler boat ride away from the nearest mainland port.

The landscape of chars is constantly changing. Each year water levels rise following the monsoons, and as this occurs, the river engulfs and washes away large swathes of land. Each island has a very short life span and that those who live on them are in perpetual danger. Roads, electric lines, courts, hospitals and universities—state infrastructure that other regions can take for granted are absent here.

As Ahmed Toufiq Rahman, assistant director of Friendship’s Inclusive Citizenship sector claims, due to their desolate nature, communities living in these islands generally have no real understanding of what they are legally and constitutionally entitled to. Too many people in these areas, he says, “don’t know about their rights, they don’t know about their laws… they know they are Bangladeshi, but what does that mean?”

And that is a fundamental question to pose: what does it mean to be the citizen of a nation? The most basic definition of a citizen is a member of a state, whom, given this status, is legally entitled to a set of rights and privileges. Nur Alam and his brother are both undoubtedly citizens of Bangladesh. Yet, they were not able to access such rights and privileges. And unfortunately, given how isolated chars are, how far they are from the mainland and mainstream infrastructure and how difficult and costly it is to reach them, this is the reality for millions of char dwellers, who are unable to access services provided by the state—services that are integral to any definition of the term citizen.

Thus, the work of organisations like Friendship is crucial, because by focusing on rights protection and the empowerment of the marginalised, the organisation provides a platform to these communities, educating them such that they can fight for the rights they, as citizens, are entitled to. Laura Arpetti, a lawyer from Luxemburg who visited Bangladesh in 2019, notes that she “saw Friendship’s impact the most on women”, claiming that in chars where the organisation intervenes by conducting gender equality classes, for example, women were much more “confident, outspoken” and unwilling to tolerate oppressive, patriarchal practices.

Both Toufiq and Laura pinpoint Friendship’s innovation and core values as the characteristics that set it apart. Indicative of its innovation, for instance, is the organisation’s creation of char theatres, where performances are held that aim to tackle oppressive behaviours and practices, like child marriages and domestic violence. Friendship has established youth groups, in order to sensitise young char dwellers to social issues and has a coalition of paralegals at its disposal, that act as a bridge between the local government and ostracised char dwellers, handling cases, mediating and community organising. Laura states that these paralegals are “so dedicated to their work”, asserting that “nowhere in our Western societies, would [she] have seen people who were so respectful.” Validating her assertions is the fact that, it was the effort of Friendship Community Paralegal, Rafiqul Islam, that finally led to Nur Alam’s brother finally being granted a government-issued disability card and it was the paralegal’s tireless brokering with union council members that enabled Nur Alam to receive his allowance just one year later. This dedication and values-based approach is intrinsic to the ethos of Friendship.

Ultimately, lack of access to services is a global social crisis, not only one which afflicts the developing world. In the UK, for example, estimates from Doctors of the World UK suggest that over 80% of patients that visited their clinics in 2015, were unable to register with their local GPs. These individuals were often the most vulnerable members of society, mostly migrants, but also native citizens living below the poverty line and residing in unstable accommodation. These precarious circumstances, although not nearly as grave as those faced by char dwellers in Bangladesh, expose the fact that all over the world, citizens of nation states are being denied their most basic rights.

And if this is the case, then perhaps the humanitarian efforts of organisations such as Friendship, could be replicated by governments and international bodies all over the world. If such institutions were to build on the innovative practices of Friendship and were similarly driven by values of determination, dedication, and respect, then we could potentially begin to imagine a world in which all citizens were treated as such, and the successful case of Nur Alam and his brother would no longer be perceived as a joyous anomaly, rather an accepted norm.

Leopoldo Moncada is an undergraduate student going into his third and final year studying politics at the London School of Economics and Political Science. His key areas of interest include social justice, human rights and climate activism. 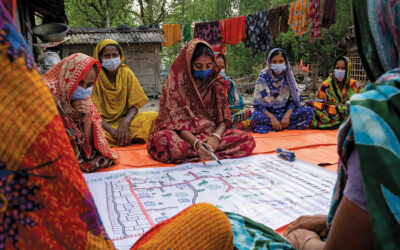 20 things that make Friendship the organisation that it has grown to be by Raeed Abd-Allah ChowdhuryNovember 6, 2022 Since its inception, Friendship has had to innovate to meet the requirements of the unique geo-logistical, socio-economic, and environmental challenges...