Girls of secondary school age are particularly vulnerable to the practice of early marriage in rural Bangladesh. The situation is even worse in remote areas where majority don’t have the means to attend distant secondary schools. UNICEF reports that in Bangladesh, 29.1% girls still get married below 15 years of age and a large number of this population live in the remote areas. Friendship’s secondary education gives girls the opportunity to continue their studies within their own community and to envisage a brighter future for themselves, and you can help. 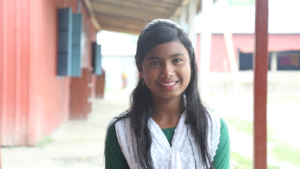 Khadijatun, nick-named “Cobra”, has been in Friendship’s primary schools since she was 5. She graduated the national primary examination with an A+ grade. Her father was a day labourer, and he did not have the means to send her to a secondary school in town, where the next nearest school was back then. He was considering marrying her off instead. In these isolated, ultra-poor regions of Bangladesh, child-marriage is still a common, though illegal practice. Many parents would rather hand off the care of their daughters to a man that they barely know, than sustain her welfare which they are often actually unable to do.

Coincidentally her father came to know of Friendship’s new secondary school when he was dredging a pond to build it as a day labourer. He changed his mind, and the fate of his daughter.

One of Friendship’s 7 secondary schools is in Jatrapur, a small riverine island (char in Bangla) in northern Kurigram district. These islands come and go, this discourages facets of modern civilization from being present – roads, gas, electricity; much less schools and hospitals. 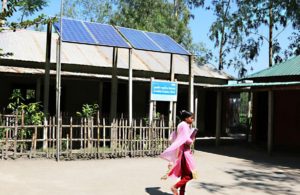 To bypass the isolation, Friendship innovated tailor-made Information and Communication Technology (ICT)-aided classrooms that do not require teachers to be geographically present on the island. This is done using video lessons pre-recorded by the teachers from the best schools in the capital, and thereafter projecting them on multimedia displays powered by solar panels. The classes are conducted by facilitators recruited and trained from the local community. The pre-fabricated schools are also designed to be easily dismantled and moved in case of a natural disaster. As such, it addresses all the major concerns that has thus far prevented schools from being able to operate in these areas.

In the last academic year, Friendship’s schools have had a 100% pass rate, with 98% scoring A- or higher in the national junior secondary exam, a statistic that beats the national average. 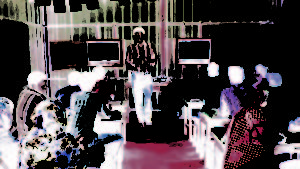 “It has changed life here completely. We can all read and write now. We’re not just literate, we’re educated,” says Cobra with confidence and hope to fulfil her ambition someday soon.

4,500+ students attend 79 Friendship Primary Schools and 7 Friendship Secondary Schools each year. In the river islands where Friendship has been working since 2012, early marriage is almost non-existent today, while in newer islands it has drastically reduced to more than 50% in recent years. Thanks to Friendship’s Inclusive Citizenship sector for creating social awareness alongside providing access to education by the Education sector.

“Our schools are significantly reducing early marriage and child labour; improving community hygiene, knowledge of human rights and better living conditions for the adults who were illiterate,” says Ayesha Taasin Khan, director and head of inclusive citizenship and education of Friendship.

Make a donation, make a difference. 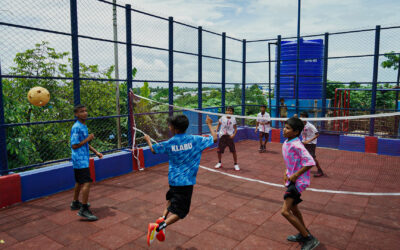 Champions in the Making

Winning girls' team from Bhalukiya Palong High School highlight the impact of sports facilities in Ukhiya The sports cage has space allows for a variety of sports to be played by the participating children. ©Friendship by Nazm-us Saadat and Sohani ShahidOctober 24,...