Friendship collaborated with national television network, RTV recently to air a mini-series about the life on the chars—i.e., the riverine deltaic islands in Bangladesh’s most isolated subdistricts. Cut off from infrastructure or access, these impermanent islands constantly shift, appearing and disappearing dozens of times within a generation. Chare Jibon Jemon shows us various aspects of the lives of the communities that dwell upon these, most difficult places inhabited by people.

These climate-affected people are constantly displaced by erosion, leading to a plethora of socio-economic ramifications. Most notable of these is a distinct lack of formal education, extreme poverty and myriad inter-related effects like child marriage.

These problems are exacerbated by a lack of resources, long-term life planning, the lack of legal enforcement, education or economic opportunity, and the residual effect of archaic, conservative, rural mindsets that are difficult to change without the proper avenues for social awareness.

This episode discusses this aspect of life on the chars in particular, featuring interviews by Friendship’s assistant director of Inclusive Citizenship, Toufiqur Rahman, and former State Minister Meher Afroz Chumki, chairperson of the Parliamentary Committee on the Ministry of Women and Children Affairs.

James Earley: Putting a face on the sidelined in society

Friendship News DeskJune 2, 2022 James Earley, renowned figurative artist from the UK is known for his hyper-realistic portraits. Not just for the intricate detail in every wrinkle, every strand of hair and every iris, but for the raw emotion in every painting. Most... 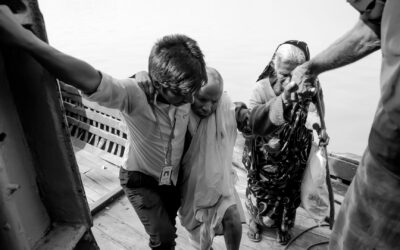 Beyond the call of duty

Inspiring stories of Friendship community staff going beyond their responsibilities for humanity and the well-being of their communities Friendship staff help an elderly man onboard ©Wasama Doja/Friendship by Tahmeed ChaudhuryMay 25, 2022 When Friendship Community...