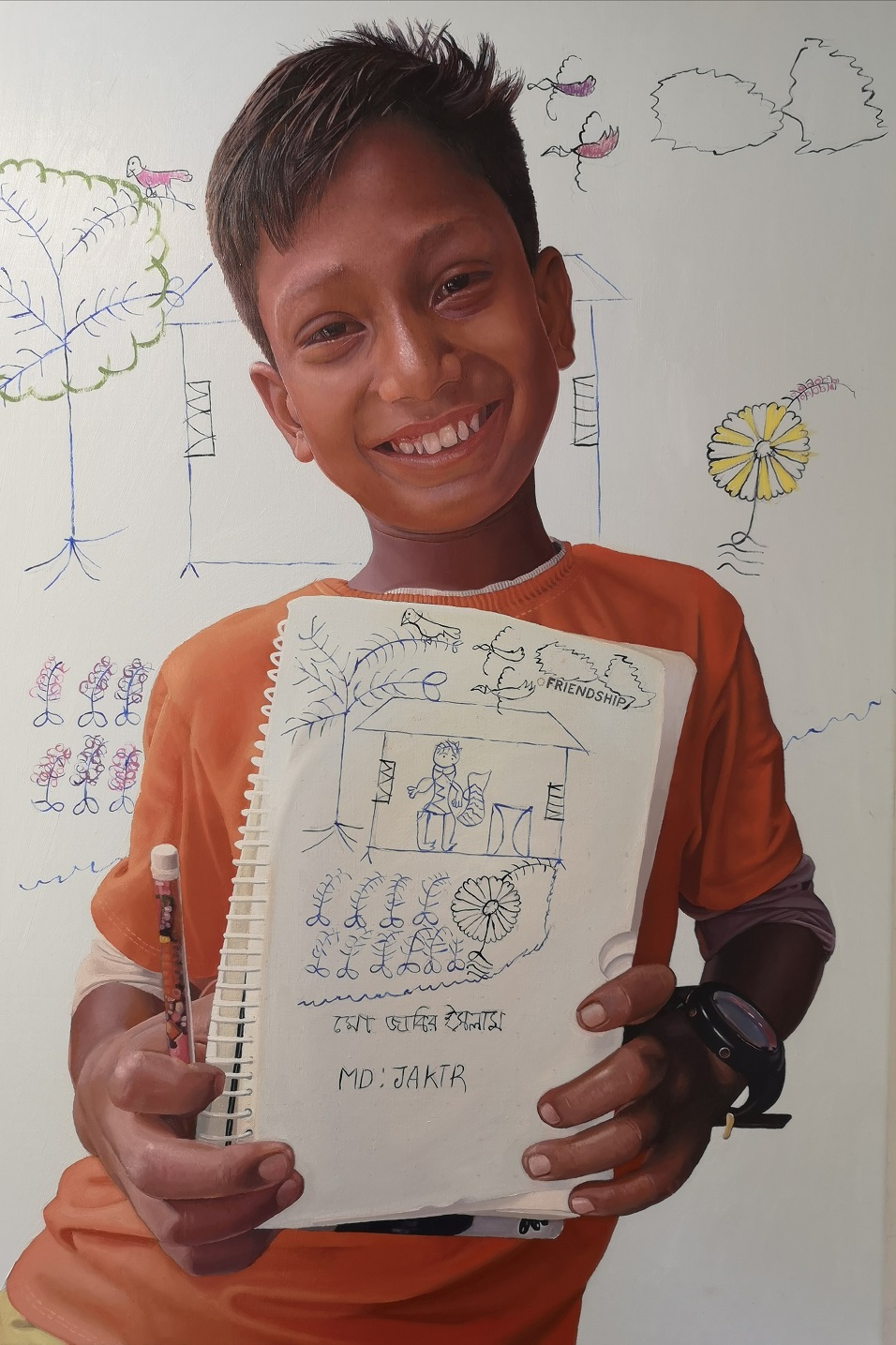 It was May 11th 2022 and my first visit on this hot and sunny day was Porar Char. Porar Char is an island of approximately 950 people and and is one of many islands in the Brahmaputra river in northern Bangladesh. This island like all the other islands in this region had seen ever increasing frequency and intensity of floods caused by climate change and because of that it is common to find families who have shifted home more than 15 times due to river erosion. Each time that a family has to start again from scratch on a new island represents a crushing blow to morale and hope.  Porar Char endures severe poverty both because of the impact of recurring natural disasters and because their remoteness effectively excludes them from access to the mainstream economy and the support mechanisms available from the state. It was this story of sadness and despair that was in the forefront of my mind as I disembarked the small wooden boat and made my first steps on to Porar Char.

This island was a little different, the first sounds that I heard was the laughter of children and the first sight that I saw was a small raised village in the distance. This raised village or “plinth”  is a micro village raised above flood levels which helps to protect people and their assets when disasters strike. This plinth village was built by Friendship and the local community and offered huge hope to the people of Porar Char. Friendship had built an entirely self sustaining village with fresh water pumps and vegetable gardens and the community had even built a small shop.

When I got to the village I spoke to Kahinur who told me that in the last 10 years she had lost her house 6 times. She had to take out loans to afford to hire a boat to take her belongings to another island where she would have to start all over again. She would spend days “Living in fear”. When she saw the plinth being built in 2019 she asked if she could live in the village and she has lived there ever since and now as she says “I do not worry, I am happy now.”

Before I got to the island I was continuously asking myself how I could feel the real and raw emotion of the community. My experience so far was that these polite and kind people almost stood to attention when interviewed which was really helpful to gather knowledge but I could not really see and feel how they were feeling deep down so I came up with the idea of asking a child to draw something, draw anything so I started asking the children if they would be happy to do this. The first child I met was an extremely happy and inquisitive young girl called Mim but unfortunately she was a little too shy to draw but then I was told of a young boy called Jakir who loved drawing and so when I met Jakir I gave him my notebook and a couple of pens as I think my blue pen was running low on ink and I asked him to draw. As he sat drawing crowds started forming around Jakir desperate to see his drawing and it seemed that the entire village was mesmerised. After a period of approximately 15 minutes Jakir had finished and the entire village burst into a long round of applause. Jakir was happy and so proud. He had drawn a beautiful image of his house that sat way above the water surrounded by birds and flowers. I saw a picture of hope and relief and I could see this hope and relief everywhere I looked.

As I left Porar Char I stated to think how I could show this hope and relief in a painting. I thought of Jakir staring at me with his eyes wide open and smiling as he held aloft his masterpiece so of course I need to paint this image. I then thought of the background, what should I add? The answer was simple, the background was also the foreground it was Jakir’s image of his house, his hope, his relief as this feeling was everywhere. I then asked myself if I should add colour to the background and then I thought of Friendship. Friendship aims to develop scalable solutions to strengthen marginalised communities, and empower people to transform their lives and reach their full potential. It is this “empowerment” and togetherness that hit me. It was like saying to Jakir “Here is the pen and paper, you draw your future and we will help you colour it in.”